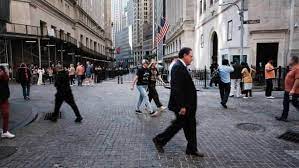 The stock market’s short-term fate is riding on something that’s been a major boon for equities for more than 70 years: US midterm elections.

Rising interest rates, mounting recession risks, and the steepest inflation in four decades may cause a break with past trends. But the fourth quarter and year after mid-term elections have historically been the stock market’s strongest stretch during the four-year presidential cycle.

With polls showing that Democrats could lose control of the US House or the Senate, stocks may get a further lift from another traditionally friendly factor: a divided government that would virtually doom any major legislation that could shake up the economic outlook.

“A split government would be good because nothing would get done, and we’ll get no more uncertainty for the next two years,” said Kim Forrest, chief investment officer at Bokeh Capital Partners. “Businesses can operate when they know what the playing field is, and if Republicans control Congress amid a Democratic president, that will bring US companies some certainty.”

A period of stock-market gains spurred by Washington would be welcomed by investors, who have been battered as the Fed’s most aggressive monetary policy tightening in decades drove the S&P 500 Index to a 21% loss this year.

Losing even one chamber of Congress would lessen Democrats’ ability to enact fiscal measures to spur the economy if it slows. That would remove one potential reason for Fed Chair Jerome Powell to raise interest rates even further to rein in inflation. Investors will get another crucial reading on rising prices when the consumer-price index hits on Thursday, which will also help determine the pace of the central bank’s rate increases in the coming months.

Options pricing indicates that the S&P 500 would rise as much as 0.7% on a Republican win and fall as much as 3.3% if the Democrats somehow hold on to Congress, according to Optiver’s estimates.

To be sure, the results may not be immediately clear, especially if candidates refuse to concede or incite challenges to the results. And the risk of violence or protests could disrupt sentiment after the vote.

Over the longer term, however, equity bulls make take comfort in the fact that US stocks are in the most bullish time in the 16-quarter US presidential cycle. The fourth quarter of midterm years and the following two quarters historically have been the strongest, delivering average gains of 6.6%, 7.4%, and 4.8% respectively for the S&P 500 since 1950, according to Carson Investment Research.

This year’s outlook, however, is complicated by the specter of the Fed’s rate hikes. Last week, Powell dashed any expectations for a shift in the central bank’s plans, saying it still has “some ways to go” with lifting rates and that its key policy rate may peak higher than expected.

“Midterm seasonality can’t hold up this time around because the market still hasn’t come to grips with the fact that rates will need to stay higher for even longer,” said Liz Young, head of the investment strategy at SoFi.

“Some investors are confusing a Fed pause with a Fed pivot,” Young added. “A pivot would mean the Fed is completely changing directions. It’s not. The chances of averting a recession are pretty low, so a Fed pause is very likely in 2023 because they need to see the effects on the economy from what they’ve already done. But a pause doesn’t mean they’ll decidedly move rates lower after a pause ends. They could pause and still hike again, especially if inflation remains high.”

Such a pause would come during what’s historically a strong period for stocks. Year three of the presidential cycle — next year — has been by far the strongest since World War II, pushing the S&P 500 14% higher on average, data compiled by Bespoke Investment Group show. The S&P has gained 57% of the time in year two of the election cycle and 83% of the time in year three.

Another promising precedent: The S&P 500 has barely experienced any weakness in the wake of midterm elections in the past. On average, the gauge traded higher in the subsequent month, three months, half a year, and full-year after the midterm elections, according to an analysis of data going back to 1950 by Willie Delwiche, an investment strategist at All Star Charts. A year after the midterms, the S&P 500 was up 15% on average.

To Delwiche the logic works like this: politicians in power want to get reelected, so they start creating more accommodative policy ahead of the general election. But this time around there’s little certainty as to what will happen next, and discontent over inflation may alter the typical political playbook.

“This cycle is different in that we haven’t seen so far more stimulative policy, we’ve seen the opposite,” said Delwiche. “This cycle isn’t an anticipation of what’s coming, but rather a reaction to what’s already happened. If Republicans win in the midterms, maybe policies would be more markets-friendly, and that could support the S&P.”