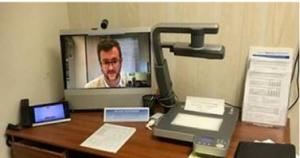 National Taxpayer Advocate Erin Collins is protesting a decision by
Internal Revenue Service officials to postpone the implementation of
scanning technology by the next tax season to deal with a backlog of
millions of paper tax returns.

Collins called on the IRS during tax season to implement the kind of
commonly used scanning technology already in use by many other
government agencies and businesses of all kinds, such as 2-D
barcoding, optical character recognition, and machine-readable text.
She issued a rare Taxpayer Advocate Directive last March as the IRS
struggled to overcome a backlog of millions of unprocessed paper tax
returns from last year and this year.

Lawmakers in Congress echoed her concerns during oversight hearings
with IRS commissioner Chuck Rettig, who reminded them that the funding
for scanner technology had been left out of congressional
appropriations bills for years.

IRS deputy commissioners Douglas O’Donnell and Jeffrey Tribiano issued
a response last month to Collins’ directive, saying the IRS is still
pilot testing various technologies, but without making any commitment
on timing. However, in a blog post-Thursday, Collins said she is
appealing their decision, citing the urgent need for the scanner
technology to be in place by next filing season.

“Due to the magnitude of this issue and the unprecedented backlog of
paper returns, I took the unusual step of appealing the deputy
commissioners’ decision to the commissioner for reconsideration,”
Collins wrote. “Our taxpayers and employees deserve a 21st-century tax
administration that utilizes technology to streamline tax
administration, most notably by delivering timely tax refunds. I
believe IRS executives and employees wholeheartedly agree with this
statement. As such, I was disappointed in the deputy commissioners’
response to my TAD.”

She noted that since the start of the COVID-19 pandemic, tens of
millions of taxpayers have experienced significant delays in receiving
their tax refunds, with some waiting 10 months or more.

“I have previously said that paper is the IRS’s Kryptonite and the IRS
is buried in it,” Collins wrote. “Paper returns remain the IRS’s
Achilles heel because the IRS still — in the year 2022 — has not
implemented technology to machine read paper-filed returns. As a
result, employees must manually keystroke into IRS systems each digit
on every paper return. Not only does manual data transcription delay
refunds, but data transcription errors were made on 22% of paper-filed
returns processed last year, which causes rework and additional
frustration for taxpayers and the IRS itself.”

She acknowledged that in the fiscal year 2017, the IRS requested
Congress to appropriate $8.4 million so it could implement 2-D
barcoding, but Congress didn’t provide the funding, so the IRS let the
proposal drop. However, she believes the IRS could have found the
funding elsewhere.

“It is not clear why the IRS, managing a budget that at that time
exceeded $11 billion, could not reallocate funding to cover the $8.4
million implementation cost,” said Collins. “Had it done so, the
technology would have paid for itself many times over.”

In their response to Collins’ directive, the IRS deputy commissioners
discussed their progress in testing out the scanner technology.

“We have pursued and continue to pursue a variety of options to gain
efficiencies in processing paper filed returns,” O’Donnell and
Tribiano wrote. “One such technology is 2-D barcoding. Several states
have adopted 2-D barcoding, and we are in discussions with some of our
state partners to learn from their experiences. At the same time, we
have implemented several pilot programs to test barcoding and other
technologies that may help us become more efficient. It is important
to fully test these options before singling out, and perhaps becoming
overly reliant, on any one of them.”

One of the pilot programs being tested by the IRS involves so-called
“V-coded” returns that come from taxpayers who use software to prepare
a return, print the return, and mail it to the IRS. However, the IRS’s
experience to date has been mixed and it’s continuing to work with
vendors to improve the likelihood of being able to process the returns
without errors.

Another pilot program being tested involves a “lockbox scanning
service.” This pilot uses the Treasury Department’s Bureau of the
Fiscal Service to scan Forms 940 and submit them using the IRS’s
Modernized eFile system. This pilot is showing better signs of
success, and the IRS plans to begin scanning and e-filing a portion of
paper Forms 940 via the MeF system in August.

“The goal is to accelerate this pilot and scan a larger portion of
forms in filing season 2023, depending on pilot testing results and
funding availability,” the IRS officials wrote.

Another pilot program involves the 2-D barcodes that Collins has urged
the IRS to implement. In this pilot, the IRS is receiving data from
Forms 8918 and 8886. Last December, the IRS released Form 8918 with
2-D barcodes and plans to issue Form 8886 with 2-D barcodes this
coming August.

However, the IRS deputy commissioners pointed out that before the IRS
can consider using 2-D barcodes from Form 1040, the agency will need
to talk with the software industry about revising industry standards
to align their technology with how it brings in and processes data.

“The industry would have to agree to provide this code in printed
forms prepared with their software,” O’Donnell and Tribiano wrote to
Collins. “We will start that engagement soon, develop a plan and
report back to you with the results.”

In the meantime, they noted the IRS is making more forms available for
electronic filing to encourage greater adoption of e-filing.

“A multifaceted approach is necessary to address the paper inventory
that [the] IRS receives yearly and to improve return processing for
those due refunds as well as those who owe nothing or owe additional
tax,” O’Donnell and Tribiano wrote, but they added, “We will not
implement any single option until we are confident in the delivery of
that option.”

That response fell short of what Collins has been urging the IRS to
do, and she is appealing the decision.

“The response declined to make a commitment to implement scanning
technology to machine read V-coded returns, and it expressly rejected
implementing scanning technology to machine read handwritten returns,”
she wrote. “The response further stated the IRS would not implement
any single option until it is confident in the delivery system. I
fully agree the IRS should choose an efficient and reliable delivery
system, but the TAD response does not provide specifics regarding its
ongoing efforts, a timeline to apply a delivery system to process
paper returns or the percentage of 2022 returns it anticipates
scanning. I appreciate the IRS’s efforts with the ‘Lockbox Scanning
Service Pilot’ and encourage moving forward with scanning returns. But
that pilot involves returns with which the taxpayer is making a
payment. Processing delays primarily harm taxpayers who are due
refunds, and I would like to see the IRS prioritize its efforts to
paper-filed refund returns.”