Slower Inflation Unlikely to Sway Fed From Another Jumbo Hike 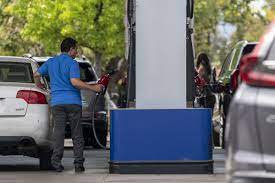 US inflation likely slowed for a second month in August as gas prices continued to drop, but that probably won’t be enough to stop the Federal Reserve from delivering another jumbo rate hike later this month.

Tuesday’s consumer price index, landing during the central bank’s pre-meeting quiet period, is the last major report they’ll receive before they make a decision. Economists forecast an 8.1% rise in August from a year earlier, which would be the second-straight deceleration.

That’s unlikely to shift investors’ bets that the US central bank will lift rates by 75 basis points for the third time in a row when officials meet in a week’s time, trying to stamp out the worst inflation in a generation. Those expectations were solidified Thursday after Fed Chair Jerome Powell reiterated that policymakers won’t back down, and Friday when some officials voiced their support for another large move.

While a decline in price growth would be welcome, it would still point to inflation that is far too high for the Fed’s comfort, said Sarah House, a senior economist at Wells Fargo & Co. “It’s a step in the right direction, but there remains a long road ahead,” House said.

Also troubling to Fed officials is that outside of gasoline, price growth in the economy is rampant and widespread. While the overall CPI is expected to post its first monthly decline since the early months of the pandemic, the core measure — which excludes volatile food and energy prices — is still projected to rise.

“It is still too early to say that inflation is moving meaningfully and persistently downward,” Fed Governor Christopher Waller said in a speech Friday, adding that he favors “another significant” rise in interest rates this month.

Powell and his colleagues have said their decision will be based on the “totality” of the economic data they have on hand when they convene on Sept. 20-21. That includes the latest jobs reports, which showed better-than-forecast payroll growth in July and August. An improvement in consumer sentiment figures and a surprise pickup in job openings also point to resilient households and consistently strong labor demand.

Fed officials target a different measure of inflation known as the personal consumption expenditures price index, which rose 6.3% in July from a year earlier — three times higher than where the central bank would like it to be. But policymakers review the CPI data for clues on where inflation is heading.

Prices would need to cool by significantly more than expected and across a range of components, including “sticky” measures such as shelter, to convince Fed officials to go with a smaller move of 50 basis points this month, said Tiffany Wilding, managing director, and North America economist for Pacific Investment Management Co.

“If you saw those coming back down just as quickly and dramatically, that would take a lot of pressure off the Fed,” Wilding said. However, that seems unlikely as other reports point to substantial increases in rent, she said.

Some Fed officials speaking in recent days have stressed that they would like to quickly move interest rates to a restrictive level that slows economic growth and cools demand and leave them there for some time. St. Louis Fed President James Bullard said a softer August inflation reading may not alter the central bank’s path.

“I was leaning toward 75 and the jobs report was reasonably good last Friday,” Bullard said in an interview with Bloomberg News late Thursday. While consumer price growth may slow, “I wouldn’t let one data point sort of dictate what we are going to do at this meeting. So I am leaning more strongly toward 75 at this point.”