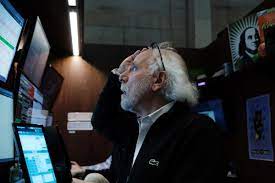 The writing is on the wall, and the majority of U.S. economists agree
that the U.S. is in store of a recession next year.

Year-over-year U.S. consumer price increases unexpectedly surged last
month to 8.6%. That means that the Federal Reserve’s efforts to slow
down the economy over the past few months through two different
interest rate hikes have yet to bear a measurable effect on inflation.

With more experts sounding the alarm over inflation, and the Fed
gearing up for even more aggressive action, economists are becoming
increasingly convinced that the economy will come to a grinding halt
and begin contracting soon.

This will likely happen next year, according to a new survey of 49
U.S. macroeconomics experts conducted at the beginning of June by the
Financial Times and the Initiative on Global Markets, an economic
policy, and market research center at the University of Chicago.

The U.S. will officially be in a recession when the National Bureau of
Economic Research (NBER) identifies a significant decline in economic
activity lasting over an extended period of time, usually thought to
be two fiscal quarters. The economy already went through a dip in the
first quarter of 2022, when GDP fell by 1.5%. Numbers for the second
quarter will be released by the Bureau of Economic Analysis in late
September.

Nearly 70% of the economists surveyed believe that the NBER will make
this call at some point in 2023, with 38% predicting that a recession
will start during the first two quarters of that year, and 30%
forecasting an official start in the second half.

Only one of the economists surveyed believes a recession will be
called this year, while 30% predict that an economic contraction will
not happen before 2024.

The biggest drivers of inflation over the past several months have
been rising prices for food and gas, both of which have been hit by a
global supply disruption since the Russian invasion of Ukraine at the
end of February.

Russian President Vladimir Putin has not been afraid to use food and
energy exports from Ukraine and Russia as a bargaining chip during the
war, which has sent prices for these commodities soaring. Over the
past year, food prices in the U.S. have gone up 10.1% and energy costs
are up 34.6%, which has led to average national gas prices exceeding
the $5 a gallon mark for the first time ever.

More than half of the economists who responded to this survey
predicted that these same forces—geopolitical concerns emerging from
the war in Ukraine and higher energy costs—will persist for the
remainder of 2022 and into 2023, and most likely continue applying
pressure on inflation in the U.S. to keep rising.

Other factors, including ongoing supply chain disruptions that are
sending prices soaring for everything from groceries to cars, are also
expected to continue impacting inflation into next year, according to
the survey.

The survey did not differentiate between a severe or mild recession in
2023, although economists did identify several factors that could
potentially limit the negative economic impacts of tighter monetary
policy.

Almost a quarter of economists believed that high consumer spending
through inflation would be the most important factor in limiting
losses and improving the chances of a mild economic slowdown, joining
the ranks of several banks and other economists who have said the same
thing.

But the biggest factor that could mitigate the chances of a severe
recession could be the U.S. housing market, which has been running
red-hot for months and will likely stay this way next year.

Over half of the economists surveyed said that the active housing
market could be what steers the U.S. economy away from a bad
recession, joining the likes of mortgaging company Fannie Mae, which
already predicted that the hot housing market could cushion the blow
during a recession.