Jamie Dimon sounds off on… almost everything: Morning Brief 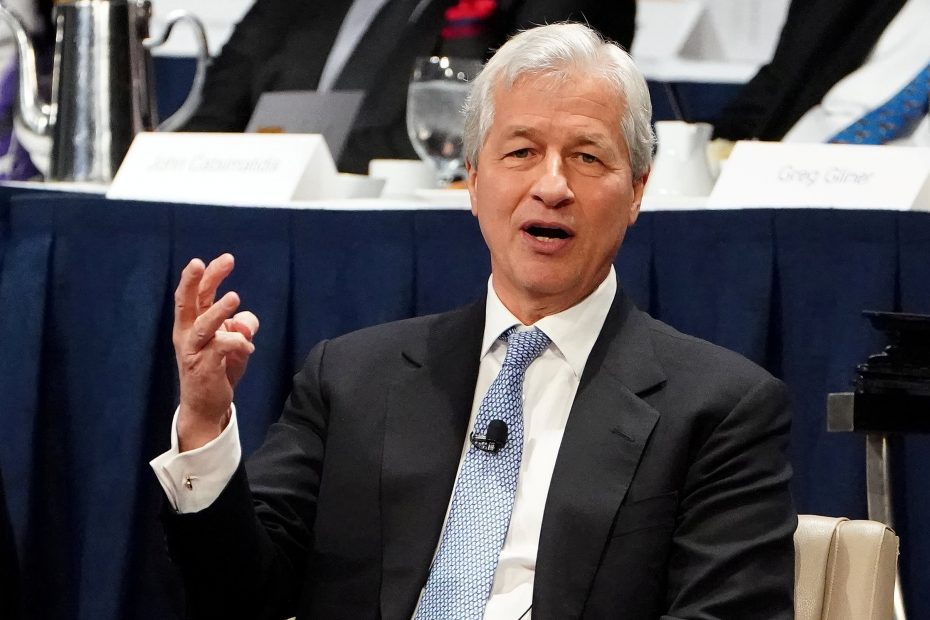 So it’s little wonder that the company puts him on calls with wealthy
clients to give his take on, well, just about everything, which is
what Dimon did this past Tuesday.

Here are some curated highlights of Dimon’s comments, which, believe
me, could’ve gone on for quite a bit longer!

‘There are storm clouds

It is a strong economy. Consumers’ balance sheets are in good shape.
Businesses are equally in good shape. When you forecast, you have to
think differently. What is out there? There are storm clouds. Rates,
QT, oil, Ukraine, war, China. If I had to put odds: soft landing 10%.
Harder landing, mild recession, 20%, 30%. Harder recession, 20%, 30%.
And maybe something worse at 20% to 30%. It is a bad mistake to say
‘here is my single-point forecast.’

On inflation, confidence, and IPOs

The numbers are so distorted when you have this fiscal and monetary
stimulus. Have you seen a recession where unemployment is going down?
[Inflation] is around 8%. I don’t see it will dissipate that quickly.
I think the Fed had 4% by the end of the year. I think that is highly
unlikely.

If you ask the question, how are you doing? What are the prospects for
your company? ‘Oh, pretty good.’ If you ask them about their
confidence, it is low. I think because of inflation, because of
partisan politics, and a lot of leftover anger from COVID-19. I wish
we had the spirit that we were all here to work together but it seems
we just got nastier somehow. [CEOs’] biggest complaint is they can’t
hire people.

I think people make a mistake when it comes to IPOs. ‘My company’s
worth $20 a share and if you want to sell at $17, I’m not going to do
it.’ Those prices are set by a lot of conversations, and a lot of
sophisticated investors. I wouldn’t worry as much about that
valuation. People take it very personally, but they shouldn’t. You
should be very mature about that.

China has serious issues. Our neighbors are peaceful. Mexico, Canada.
Their neighbors are India, Pakistan, Russia, and Vietnam. They don’t
have enough energy and food. We do. We use 10 million barrels of oil a
day. We pretty much produce most of it themselves. They use 14 million
a day and they import something like 10 or 11. Those 10 or 11 are
going by pipeline or ship. A lot of ships that go by the oil tankers
go by American warships.

Autocratic management can work in certain things but doesn’t work in
the long run. They kind of look at America and say, ‘you have been
incompetent and lazy.’ There is truth to that. We have screwed up
infrastructure. We have screwed up inner-city schools. But I think it
is a mistake to say that America has the short end of the stick.

We have the best military in the world, but we have overused it. You
see what China is doing in Africa and Asia. We need to do that, too.
America needs to take a leadership position. People are making a
mistake [with the] the America First [thinking], we’re spending too
much time and money on foreign ventures that don’t make sense. If we
don’t trade with Western allies, China is going to cherry-pick every
nation. They’ll give them 5G equipment for cheap. They’ll negotiate
deals, and lend money. They are trying to do it in Latin America. Our
backyard.

I think [China is] overreacting a little bit with this Taiwan thing.

[The Russians] are using energy as a chokehold on Europe. They are
going to freeze Germany. Putin is sitting there playing chess. This is
serious stuff.

We should focus on climate. The problem with that is because of high
oil and gas prices, the world is turning back on its coal plants. It
is dirtier. Why can’t we get it through our thick skulls, that if you
want to solve climate [change], it is not against climate [change] for
America to boost more oil and gas?

It is rare that an election either mid-term or full presidential
election actually changed the nature of the American economy in the
short run. Rare. So in terms of investing, I’m not sure it matters
that much.

A lot of people are inefficient with E-mail, phone calls, and reading.
They are always hurried. They should be thoughtful about their
calendar. They need to take care of themselves.

Don’t get into this binary thing where you’re looking at Fox or CNN.
Read the other side. Some of your fellow citizens have good reasons to
believe something different than you do. I try to think sometimes
about where are they right. Not are they wrong. You’ll become a better
thinker. And you earn peoples’ respect. By telling the truth, and
being a team player. Being a team player doesn’t mean you don’t
complain. It means you complain if we are doing something stupid.

You have to look at the flaws of the Zoom world. It doesn’t work for
an apprenticeship program. It doesn’t work for spontaneous stuff.
Management by Hollywood Squares slows down honesty and
decision-making. That disappears when you do it from home because at
home you tend to say, okay, we’ll pick this up tomorrow. People laugh
when I say it. I never did this, but a lot of people at home on a call
are texting each other, sometimes saying what a jerk that person is.
And we say we want diversity. When you come [to work] it is a rainbow
room. But if you live in certain parts of our country and go eat out
there, it is all white. You’re losing opportunities to meet other
people. I think they are cumulative negatives.

Apple, Google, and Facebook are going into [financial services]. Apple
has been the most aggressive. Apple Pay, if you use their phone you
have to use Apple Pay even though legally you shouldn’t have to. And
they are doing their own buy now, pay later. They have a white label
credit card, [with] Goldman Sachs.

Companies talk about acquisitions like that is what is going to save
them. It’s not. What is going to save us is organic growth. Better
products, better services, better bankers, better technology, hiring
and training better people. Organic growth is harder and better than
acquisitions. Most companies don’t do it because growing a sales force
is hard. Opening branches is hard. Most people come up with a million
reasons why they don’t do it.

Sometimes the kids of powerful rich people are spoiled. I hate spoiled
kids. I was very careful with [my] kids. I probably sat them down for
the first super serious conversation eight years ago. I have had a
couple of near-death experiences and I wanted to set everything up.

You can ignore the bad part of society. Not hire from them. Not drive
through the parts of town. I think it is a mistake because our society
is worse off if we don’t lift up everybody. It is far more than woke
capitalism. It is a good thing to lift up our fellow citizens. You
travel the world and see things that work. Apprenticeship programs in
Switzerland and Germany. If you have generations of kids 17 to 25 with
20% unemployment, you can be sure you’re going to have a social
problem. Jobs bring dignity, and household formation, and jobs reduce
crime. Everybody should try to help if they can.

I never sold a share of [JPM]. I bought shares. I still buy my own
stocks. I don’t have many. I don’t have any long-term Treasuries. I
think Mexico is going to be a great setup. I bought a Mexican ETF. Did
you know their labor is cheaper in Mexico than in China? And it is a
secured supply chain. If you are a manufacturer, it is a no-brainer.
Green infrastructure will be big.

I have learned by watching people and reading people. I learn a lot by
reading history books. Abe Lincoln: “I’m sorry I wrote such a long
letter, I don’t have time to write a short one.” I like the thing if
you have a little bit of a temper, which I still do a little bit.
Lincoln would get an angry nasty note and put it in his drawer, never
to be seen again.

We have mentoring. Doesn’t always mean the mentor will give you the
best advice. I think people should seek out other people to learn from
so you have a network of people that will give them feedback.

[Someone asked me]: ‘Do you show gratitude to your direct reports?’
And the three direct reports burst out laughing. Like, really? Not a
lot. But they do know I trust them, I break my back for them and
deeply love them. I gave them all a little pink box with biscuits in
it to show some gratitude and they appreciated it. Next week I came
in, I said, ‘I gave you that box, you appreciated it.’ Do you know
what occurred to me? Ted Lasso is giving the box to the boss. They
don’t give me that either.