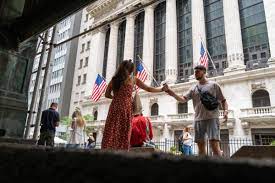 Goldman Sachs Group Inc. economists warned the risk of a US recession
has grown more likely, and have downgraded their gross domestic
product growth forecasts for the economy.

“We now see recession risk as higher and more front-load,” economists
led by Jan Hatzius wrote in the note. “The main reasons are that our
baseline growth path is now lower and that we are increasingly
concerned that the Fed will feel compelled to respond forcefully to
high headline inflation and consumer inflation expectations if energy
prices rise further, even if activity slows sharply.”

Seeking to quell the surge in living costs, the US Federal Reserve
accelerated its monetary-tightening campaign last week, executing the
biggest interest-rate hike since 1994.

While comparisons with the 1960s and 1970s are ringing louder, the
Goldman economists said hot wage growth and high inflation
expectations are less entrenched today than back then.

“What might a recession look like? With no major imbalances to unwind,
a recession caused by moderate overtightening would most likely be
shallow, though even shallower recessions have seen the unemployment
rate rise by about 2½percentage points on average,” the Goldman
economists wrote. “One additional concern this time is that the fiscal
and monetary policy response might be more limited than usual.”

While the economists maintained their second-quarter growth forecast
of 2.8%, they cut their outlook from the third quarter of this year
through to the first quarter of 2023, and now forecast growth of
1.75%, 0.75%, and 1%, respectively, in each of those quarters.