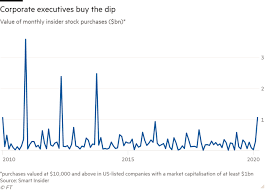 Corporate executives have this month bought shares in their companies
at a rate not seen since the early days of the Covid-19 pandemic in
what some Wall Street analysts said was an encouraging sign for the US
stock market. Between the start of the month and May 24, insider
buying at S&P 500 companies has been the strongest since March 2020,
according to figures from VerityData. For the broader Russell 2000
index, there have been more insider buyers than sellers this month for
the first time since March 2020, VerityData said. Despite retail
investors pulling out of the stock market and the looming threat of a
slowdown or recession, “corporate insiders are holding a non-consensus
view across most sectors and [are] actively buying the dip”, analysts
at JPMorgan said in a May 27 note, adding that the share purchases
were encouraging for the direction of stock markets.

US stocks snapped a seven-week losing streak on Friday, although the
benchmark S&P 500 index is down 12.8 percent so far this year. Strong
insider buying “has historically been a pretty good sign of market
bottoms”, said David Giroux, portfolio manager at T Rowe Price.
“Insiders are saying ‘we don’t see a massive event coming’ . . .
[that] these are really good buying opportunities,” he added. “This is
just another confirming data point that should be positive for the
market over six to 12 months if not longer.” Earlier this month Howard
Schultz bought $15mn of Starbucks shares after returning as interim
chief executive in March to the company he turned into a global coffee
chain. It was the first insider stock buying at Starbucks since August
2018, VerityData said. Starbucks shares are down about 35 percent so
far this year.

Vladimir Shmunis, co-founder and chief executive of RingCentral, a
web-based app company that replaces landline phones, spent $1.2mn on
his first stock purchase since the company went public in 2013.
RingCentral has seen its share price plunge more than 60 percent this
year. Representatives from Starbucks and RingCentral did not respond
to a request for comment. “There is certainly message sending [with]
buying and some of it is performative,” said Ben Silverman, research
director at VerityData. However, Silverman said he would have expected
“more intense buying right now”, especially at S&P 500 companies. “In
March 2020, no one had any clue how the next two years would play
out,” he said, adding that at the start of the pandemic “we saw a lot
more [buying] conviction”.