Commerce Secretary Warns against ‘Talking Ourselves into Recession’ 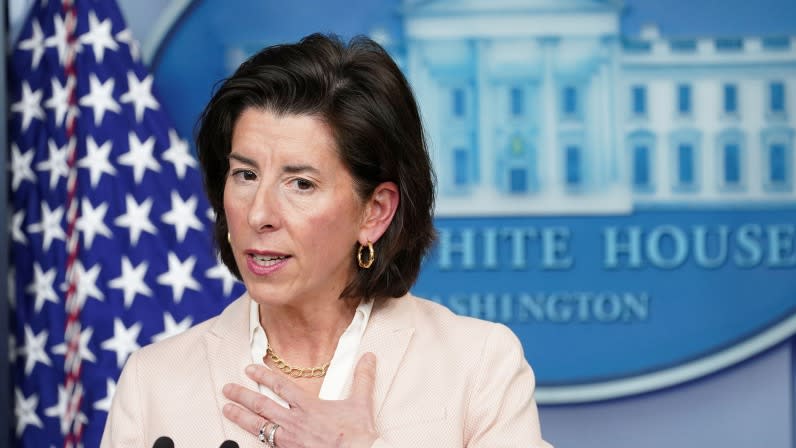 Commerce Secretary Gina Raimondo on Sunday expressed doubt that the
nation will head into a significant economic downturn but warned
against “talking ourselves into a recession.”

She said it’s typical for the Federal Reserve’s hikes in interest
rates to slow economic growth. For over two years, the U.S. has
struggled to recover from pandemic-related economic problems, namely a
supply-chain crisis and subsequent soaring inflation.

“I do think at some point, we will see a less rapid growth in the
economy, but I don’t see any reason to think that we will have a
serious recession,” Raimondo said during an appearance on ABC’s This
Week with George Stephanopoulos.

While the unemployment rate is a relatively un-alarming 3.6 percent,
inflation has remained persistently high, climbing to 8.6 percent for
the twelve months that ended in May. In response to the concerning CPI
data, the Fed’s Federal Open Market Committee (FOMC) raised the
federal funds rate by 0.75 percent in June. At a recent press
conference, Fed chairman Jerome Powell remarked that the recent surge
in the monthly University of Michigan inflation expectations data was
“quite eye-catching and we noticed that.”

Some economists believe that inflation expectations largely contribute
to sustained inflation, meaning that Raimondo’s claim that enduring
inflation could be willed into existence may hold water.

“The fundamentals of this economy are very strong,” Raimondo said.
“Inflation is our problem, and it is our top priority. And so I think
perhaps a transition to a more traditional growth level, but I don’t
think we should be talking ourselves into a recession.”

The commerce secretary recognized that inflation has been “hard on
folks” but added that there have been promising signs for gas prices.
On Friday, average U.S. gas prices dropped by 3.1 cents to $4.721 a
gallon after hitting close to $5 in some parts of the country,
according to auto organization AAA. The economy also added  372,000
jobs in June, the Labor Department reported Friday.

“You’re starting to see gas prices come down, wholesale gas prices are
coming down,” Raimondo said. “But until we do get a handle on
inflation, I think it’s natural for a family to be feeling that
pinch.”