Can the U.S. Embrace a Four-day Workweek? 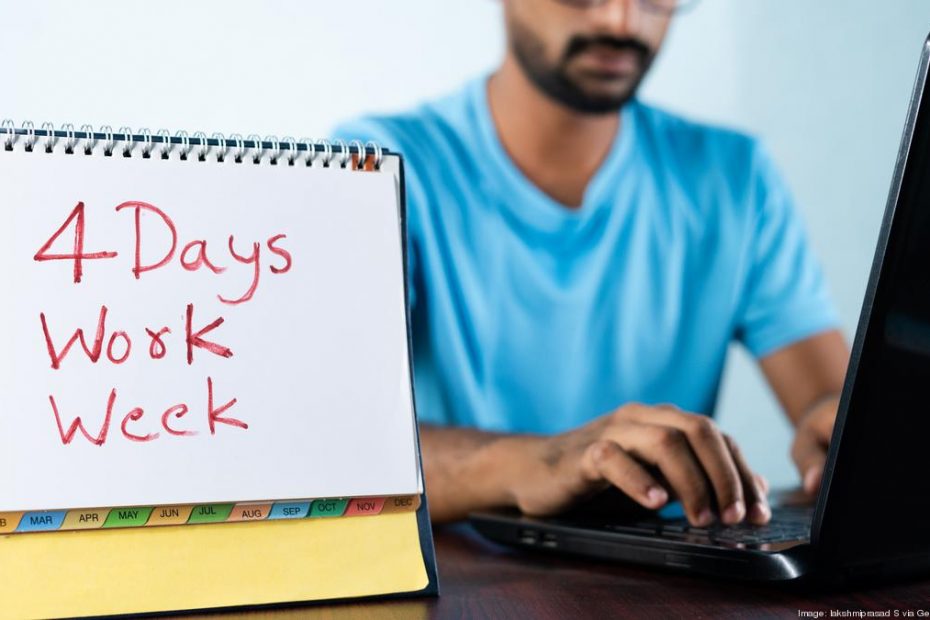 With the pandemic-fueled demand for more workplace flexibility, could the four-day workweek become the norm in American business? Three Wharton experts don’t hold out hope for change.

When Wharton management professor Matthew Bidwell first came to the United States from England in the 1990s, he was struck by the dogged American work ethic.

“It was a culture that was much more organized around work than in the U.K. When I was growing up, there wasn’t quite the same heroism about long hours,” he recalled, adding that workaholics in Britain were regarded as people who needed to get their priorities in order.

“Work gives us a sense of meaning and accomplishment, and more of our identity is tied to work. But it also crowds out a lot of other things we’d like to be doing,” Bidwell said.

That desire to do other things is why more than 3,300 employees across 70 companies in the U.K. are participating in a pilot program to work four days a week in exchange for the same productivity and pay. Launched in June, the six-month experiment led by the nonprofit 4 Day Week Global relies on previous research that finds employees are happier, healthier, and more efficient with reduced working hours.

Forty companies in the U.S. and Canada have joined the pilot program, with another 60 signed up for a second phase in October. While 100 companies are a propitious start, the number is hardly enough to shift the zeitgeist in America, were coming into the office before breakfast, working through lunch, and answering emails after dinner are de rigueur.

With the pandemic-fueled demand for more flexibility in the workplace, could the four-day workweek grow beyond the experiment to become the standard in American business? Three Wharton experts, including Bidwell, said it’s a nice idea that could take root in small pockets of industry, but they don’t hold out hope for widespread change.

“Never say never. But I’m not anticipating it happening anytime soon,” Bidwell said. “I don’t think there’s a huge clamor for it. We are a bit of a workaholic nation, and we don’t even take very much holiday.”

From Six Days to Five Days

The four-day workweek is a relatively new concept in the history of human toil. In 1956, Vice President Richard Nixon floated it as part of an “unbelievably prosperous” future under Republican leadership. His proposal was revolutionary at the time, considering that 100 hours over six or seven days a week was the norm for manufacturing and labor in the 1800s. The 40-hour week wasn’t the law of the land until 1940 when Congress amended the Fair Labor Standards Act.

Nearly a century later, advocates are now arguing that 40 hours or more is mind-numbing excess that brings no additional products to the table while robbing people of precious work-life balance. Although that argument has come and gone over the decades, it’s enjoying a revival thanks to the COVID-19 pandemic, which has prompted the Great Resignation, a tight labor market, and what seems like an inflection point for millions of workers around the world.

Earlier this year, California-based Bolt became the first fintech unicorn to switch to a four-day workweek, a move that founder Ryan Breslow proudly touted in a company blog post that ran beneath a photo of relaxed, casually dressed employees. “Work is changing and the biggest obstacle we have to face is burnout,” Breslow wrote. “Here’s what many of us know but can be tough to admit: Work will fill the space you give to it. My bet is that we’re going to become vastly more efficient from Monday to Thursday.”

Wharton assistant management professor Lindsey Cameron said it’s generally easier for tech firms to make the switch because they have nimble operations with employees who work in front of a computer screen, but she doesn’t think enough employers will follow in the footsteps of CEOs like Breslow to mandate such a drastic change.

“I honestly don’t believe our employers are going to believe that you can get as much work done in four days as in five. We see the subtle pressure they are exerting to get their employees to get back into the office now,” she said. “There is a continuum with flexibility, and spatial flexibility is easier to handle than this temporal flexibility.”

Bidwell agrees that the rising demand for remote work is “surprisingly sticky” compared with the four-day week, which most employers don’t have an appetite for. He also thinks employers don’t buy into the promise of equal productivity on reduced hours, despite evidence from the experiment and several scientific studies.

“Ultimately, pay does partly reflect how much value we create for our employers. So, economy-wide, can we continue to receive the same pay for four-day weeks? I’m skeptical,” he said.

Taking a broader view, Cameron said it’s highly unlikely that Congress would shorten the work week again, the way it did in 1940. There are simply too many competing interests and arguments for the federal government to direct all companies across all industries to do so.

“We’ve seen other sorts of regulations that haven’t been able to get as much widespread support at the national level, so there’s not going to be enough political power to push it through,” she said.

Wharton assistant management professor Michael Parke agrees with his colleagues that a four-day week has a slim chance of becoming standard, but he wants to see the idea further explored. He mentioned Gravity Payments founder Dan Price, who famously set the minimum salary of all his employees at $70,000 and tweeted about the benefits of going and staying remote.

“I do think you’re seeing a lot of different arrangements of work, so why not do this?” Parke said. “Whether people want to work 80% and four days a week or 10-hour days or whatever the math is – why not?”

Parke said the demands for flexibility are trickling down to younger generations that are rejecting the live-to-work ethos of the generations before them. In his classes, many conversations with students turn to their concerns over work-life balance. They want to be investment bankers, for example, but they worry about the 80-plus-hour weeks that notoriously come with the job.

“There are really salient, existential threats that are happening where people are questioning the ideal worker prototype of ‘do your job, be loyal, work hard.’ There is a belief that businesses are set up to exploit employees,” he said.

Still, there’s only so much counterculture that students can afford.

“At the end of the day, you need to make money. You have to support your financial security goals first, and that’s sometimes the trade-off people make,” Parke said.

Although the pilot program in Britain cuts across different sectors, the professors draw a sharp line of distinction when it comes to who is most eligible for a four-day workweek. It’s office workers.

For restaurants, retail, hospitals, manufacturing, law enforcement, and any other profession that operates almost continuously, coverage is essential. A four-day week would require managers to hire more personnel to ensure all the necessary work gets done.

“It seems ridiculous that a restaurant owner can entertain this conversation when they can’t even hire enough workers to do six days a week,” Cameron said. “This conversation is for one type of audience, and it’s hard to see how to include frontline and service workers in the United States.”

Parke agreed, saying the COVID-19 pandemic created a huge disparity between frontline workers who had to be on-site, risking their own health and safety in the service of others, and knowledge workers who had office jobs with the option of working from home. Shifting to a four-day week will only widen the divide, and it risks deepening the wealth gap between rich and poor.

“Cynically, it feels like the gap between these workers is already so vast that it’s hard to make things worse,” Bidwell said, adding that pay is often commensurate with hours. “Historically, what you’ve seen is at a certain point, professional managerial workers work substantially longer hours, and they get paid vastly more.”

A Culture of Busyness

Despite the lack of traction, the conversation about a four-day workweek persists. Wharton management and psychology professor Adam Grant, who has long advocated the four-day week, even hosted a panel discussion about it at the Davos World Economic Forum in June. In his opening remarks, Grant mentioned how American automaker Henry Ford boldly switched his workers from six days to five days a week in the 1920s because he knew it would improve morale, loyalty, and productivity.

“We could start to wonder, well, why are we now stuck on five days?” Grant said to the panel. “Was that ordained from on high, or is this, in fact, a human intervention that deserves to be rethought?”

One of the panelists was Ohood Bint Khalfan Al Roumi, a government minister in the United Arab Emirates, which implemented a four-and-a-half-day workweek this year for all government employees and agencies, including schools and hospitals. Al Roumi said that the result has been a 55% reduction in absenteeism, 70% of employees reporting greater efficiency at work while spending more time with their families, and 50% of private companies operating in the UAE following suit.

But the UAE is not the U.S., where a culture of busyness is deeply ingrained. Cameron, who has lived in Egypt, Mali, Algeria, Germany, and other places during her previous work in U.S. intelligence, notes that the American work ethic “is our most successful cultural export” because it has influenced so many other nations. She thinks Europe, especially Scandinavian countries, offers a much healthier work-life balance than the U.S.

“I think 20% of the workforce, the most elite, are going to get more flexibility like unlimited vacation time and some of these things we’ve asked for,” she said. “For the remainder of the American workforce, it’s going to stay mostly as it is.”