After This Year’s Slump, S&P 500 Faces a Historical Warning Sign 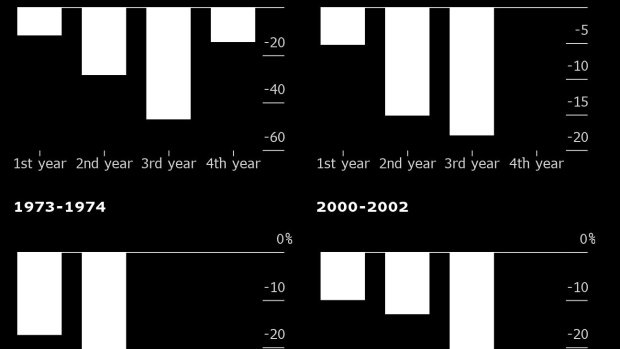 Consecutive down years are rare for US stocks, so after this year’s drop, there’s only a low probability they will decline again in 2023. Yet if they do, history shows that investors will have to brace for another very unpleasant 12 months.

Since 1928, the S&P 500 Index has only fallen for two straight years on four occasions: The Great Depression, World War II, the 1970s oil crisis, and the bursting of the dot-com bubble at the start of this century.

In the benchmark’s almost 100-year history, such occasions are clear outliers. Yet when they have occurred, drops in the second year have always been deeper than in the first, with an average decline of 24%. That would exceed this year’s slide of about 20% to date.

More than two back-to-back years in the red are even rarer. The S&P 500 tumbled for three straight years from 2000 to 2002 and from 1939 to 1941, while the longest losing streak remains the aftermath of the infamous Wall Street crash when stocks fell for four years from 1929 to 1932.

To be sure, both fund managers and Wall Street strategists forecast a muted recovery for the S&P 500 next year.

“Recession does not have to be doom for equities and markets tend to bottom before a recession starts,” said Manish Singh, chief investment officer at Crossbridge Capital. He believes the S&P 500 saw its bottom in June during peak inflation.

–With assistance from Michael Msika and Guy Collins.