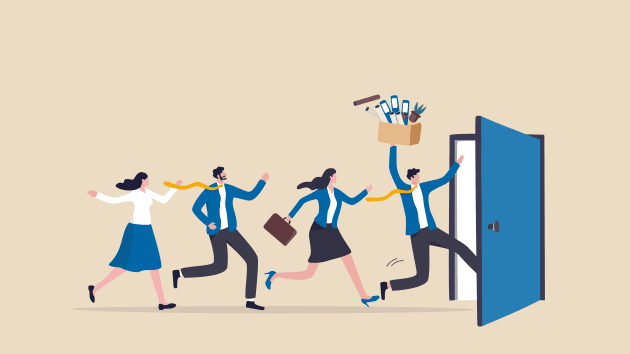 More than 4 million people have left their jobs each month in the U.S.
so far this year — and according to new research, this record-breaking
trend isn’t going to quit anytime soon.

About 40% of workers are considering quitting their current jobs in
the next 3-to-6 months, a report from McKinsey and Co. published last
week, which surveyed more than 13,000 people across the globe,
including 6,294 Americans, between February and April, has found.

“This isn’t just a passing trend, or a pandemic-related change to the
labor market,” Bonnie Dowling, one of the authors of the report, says
of the elevated quit rates. “There’s been a fundamental shift in
workers’ mentality, and their willingness to prioritize other things
in their life beyond whatever job they hold. … We’re never going back
to how things were in 2019.”

Such conversations about “The Great Resignation” often focus on why
people quit — low pay, few opportunities for career advancement, and
inflexible work schedule — but what we hear less often is what happens
after people leave their jobs.

McKinsey and Co. also spoke with more than 2,800 people in six
countries — the U.S., Australia, Canada, Singapore, India, and the
United Kingdom — who left their full-time jobs within the last two
years to find out where workers are going.

Nearly half of job-leavers are switching industries

About 48% of people who quit have pursued new opportunities in
different industries, the report found.

Dowling points to two factors driving this exodus: pandemic-induced
burnout and better odds of securing a higher-paid role in a tight
labor market.

“A lot of people realized just how volatile, or unsafe, their industry
was during the pandemic, especially those working on the frontlines,”
Dowling says.

At the same time, companies are still struggling to attract and retain
employees — a pattern that had undoubtedly caused a lot of headaches
for HR departments throughout the U.S. but has also opened the door
for job-seekers to take advantage of new opportunities that might have
been out of reach before the pandemic.

“More employers have opened up their aperture in order to meet the
yawning talent gap that they’re facing,” Dowling adds. “They’re
prioritizing skills over the educational background or previous job
experience, which is creating more opportunities across sectors for
job-seekers.”

Some industries are losing talent faster than others: More than 60% of
workers who quit jobs in the consumer/retail and finance/insurance
fields either switched industries or quit the workforce entirely,
compared to 54% of workers in health care and education who made such
a switch.

Of the people who quit without a new job in hand, close to half (47%)
chose to return to the workforce — but only 29% went back to a
traditional, full-time job, the report notes. These percentages come
from a March McKinsey & Co. survey of 600 U.S. workers who voluntarily
left a job without another one lined up.

The remaining 18% of people either found a new role with reduced hours
through a temporary, gig or part-time work or decided to start their
own business.

“People aren’t tolerating toxic bosses and toxic cultures anymore,
because they can leave and find other ways to make money without being
in a negative situation,” Dowling says. “There are more opportunities
for work now than ever before with our increased connectivity.”

More people are choosing to be their own boss: Over the course of the
pandemic, new business applications grew by more than 30%, with almost
5.4 million new applications in 2021 alone, the White House said in an
April press release.

It’s not just about escaping a toxic work environment, either. Such
non-traditional pursuits also fulfill people’s growing desire for
flexibility. The freedom to work from anywhere, or choose your own
hours, has become the most sought-after benefit during the pandemic —
so much so that people value flexibility as much as a 10% pay raise,
according to research from the WFH Research Project.

Rapid quitting could continue through 2022 unless companies make
‘meaningful’ changes

Even with a possible recession on the horizon, Dowling expects that
people will continue to quit and change jobs at elevated rates in the
months ahead.

Much of the trend has been powered by a “drastic” change in social
norms around quitting. “For a long time, you didn’t leave a job unless
you had another one lined up — that’s what everyone was taught and
what people did,” she says. “But that has changed so dramatically over
the last 18 months. … Now, people’s attitude is, ‘I’m confident that
when I want to work, there will be something for me.’”

Instead of lamenting the ongoing labor shortage, companies need to
look at the shifting economic landscape in the U.S. as an opportunity
to reshape how we work and build a better model, Dowling says.

“It’s everything from embedding flexibility in our credo to
re-assessing how we value our employees and provide them with the
resources they need to do their job … all employers have the capacity
to make these meaningful changes,” she adds. “But we have to start
taking action, as opposed to sitting back and hoping that things are
going to return to a ‘pre-pandemic norm’ — because all signs point to
the fact that they won’t.”